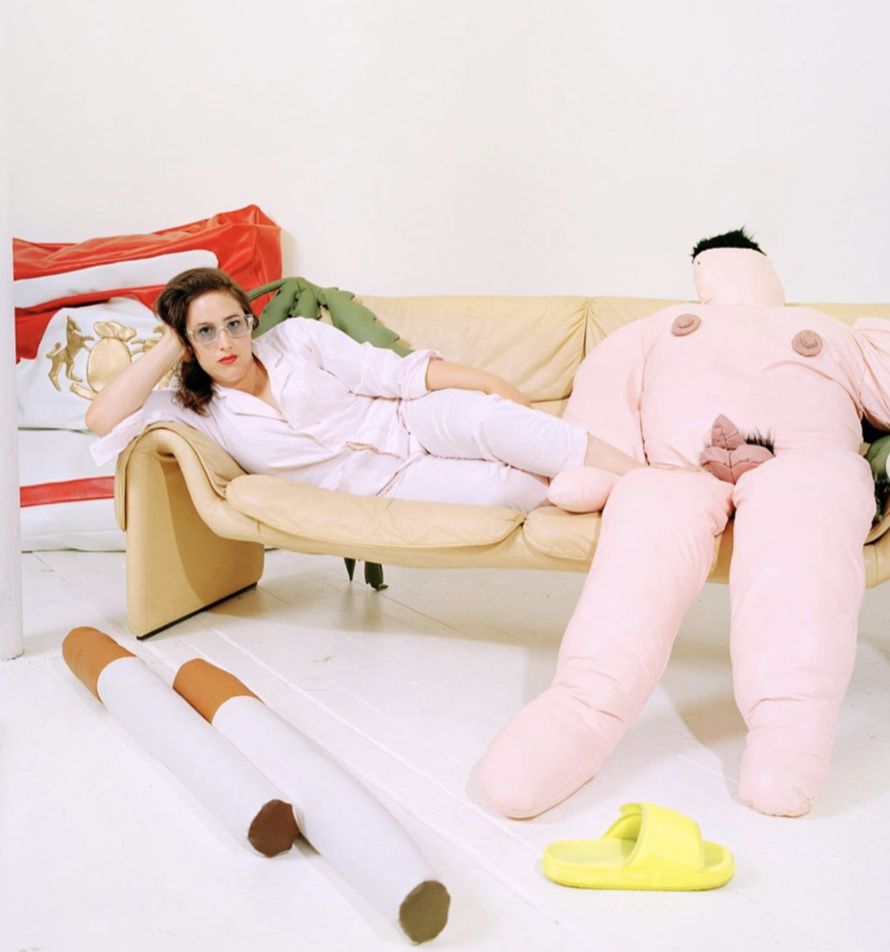 “Ms. Freeman creates a kind of Russian nesting doll of satire. One that takes in, beyond masculinity, the empty cutesiness of a nascently post-literate culture, the simulated coziness of runaway consumerism and the fun-house democracy of language itself. Here objects of incommensurate scale and importance are reduced to an artificial formal equality”.  – Roberta Smith, The New York Times, May 2018

Born in Toronto, Canada in 1981, Al Freeman is a contemporary artist based in New York.

Freeman makes large-scale replicas in loosely-stuffed pleather of banal everyday objects that have been robbed of their branding but remain instantly recognisable commodities: the cracked iphone, a jar of vaseline, a highlighter pen, a light bulb, among others, call to mind the iconography of Claes Oldenburg, but in her hands, such objects are ironically deflated and transformed into sagging objects that sink into themselves, weary of form.

More generic and specifically masculine motifs – hammers, beer cans, a dick – are subjected to the same wry treatment. Softness becomes at once Freeman’s humoristic weapon against the dominant male hierarchy of things and gendered spaces, and a whimsical allusion to materiality in the age of consumerism.

“The objects in my work come directly from what’s considered to be the most toxically masculine culture. It affects me personally, and it affects the people around me, and it’s everywhere—from frat houses up into our government. ” explains Al Freeman (in conversation with Nora Caplan-Bricker, GQ Magazine).

These collages function on a visual logic, alternating conceptual and metaphorical connections between the realms of fine arts and mass culture. This series is a disconcerting comment on sex, misogyny, cultural appropriation and sexism in contemporary culture. As commented by Roberta Smith on the New York Times: “Ms. Freeman’s comparisons are more than funny; they’re full of feminist barbs and insights into the mind’s reflexive leaps — their pleasures, tells and revelations.”

For her most recent solo exhibition, ‘Mossgrön’ at Carl Kostyál, Stockholm, Freeman took the bar code and the cracked iphone – and the accidentally colourful grids that appear when the logic board of the phone has been scrambled from being dropped – as her subjects and transformed the gallery space itself into a fabricated landscape binary landscape of green floor and blue walls and ceiling. Finding form, beauty and irony in the accidental, at the point where technology fails and the object ceases to perform its function, these works are wittily analogue, monumentalised versions of the thing has become our primary source of information and communication.

Her work has been the subject of numerous solo presentations, including recent exhibitions at Carl Kostyál, Stockholm; Bortolami, New York; and 56 HENRY, New York.

“I Made a Bunch of Dicks”: Meet Al Freeman | Elephant Magazine