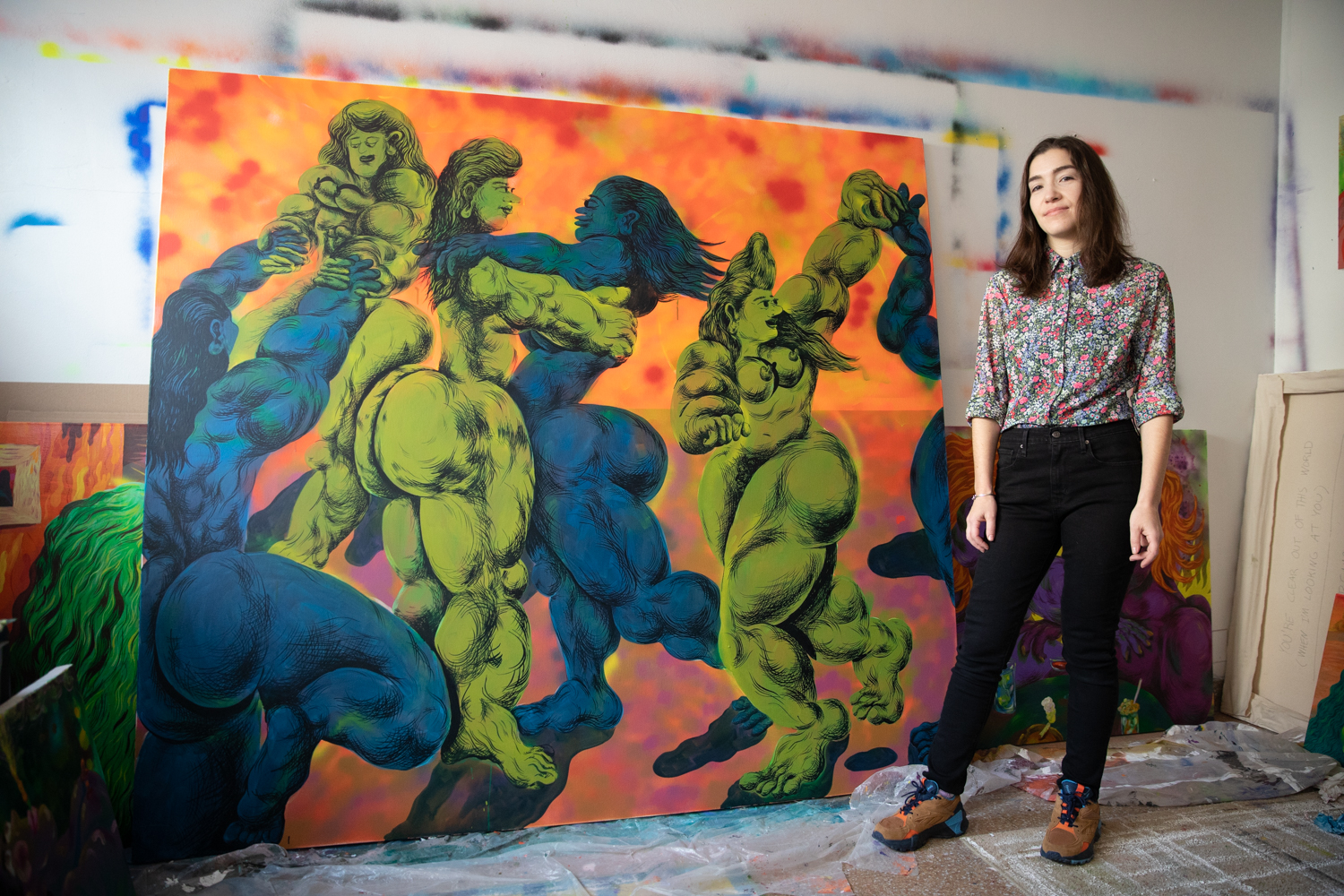 “Throughout the history of images, women and cars have had a fraught relationship. Often flung together in the pursuit of profits, women’s bodies have been used to market cars to men since advertisers managed to equate the purchase of the car, with the lifestyle the woman draped atop it represented. The automobile is a cultural manifestation of the American dream: the freedom to roam beyond the horizon and to remake oneself in the image of one’s own ambition. Yet it is precisely through the leveraging of women’s sensuality, that the car has been transformed into an American symbol of success, freedom and virility. A parallel thread of association exists through art history, running from the Italian Futurists, through to Richard Prince’s appropriated Marlboro Cowboy, and perhaps finding its apex in Jeff Koon’s Hoover vitrines: at once sterile objects and yet intensely eroticized.

For her first show with Carl Kostyál, Ana Benaroya inverts the looking glass. While the women represented in these images retain their seductive allure, they are simultaneously empowered as protagonists. By transforming the male gaze into a womanly one, Benaroya endows her figures with the qualities traditionally ascribed to the machismo viewer: strength, appetite and influence. By reconceiving and recasting the target market of these images—to whom they speak and ultimately exist for—Benaroya presents a revisionist reading of this art history.

Benaroya began the series by reading Filippo Tommaso Marinetti’s 1909 Manifesto of Futurism, engaging the text’s fanatical equation of machination, violent passion and speed with masculinity. While Benaroya alludes to Giacomo Balla and other Futurists’ use of gestural expression, intensity of color, and fascination with the intersection between person and machine, for Benaroya it is woman who stands at the Romantic forefront, pushing the work and the viewer to absolute velocity.

Benaroya bridges artistic and cultural traditions in her presentation of this revisionist history. Woman exists both as the object of the viewer’s desire, and as the author of narrative action. Works such as Hocus Pocus, On the Run, and The Green Empress leave no room for ambiguity as to who is in the driver’s seat. By pairing the figures’ powerful muscular anatomy with a femininity that exudes moments of tenderness, Benaroya imparts a new nature to these images: particularly evident in the lingering gaze between the easy riding Desperadoand her animated exhaust fumes. While it may be possible to detect a sense of desire in the Futurists’ work, there is certainly no intimacy present. It is in these moments, in the combination of strength and sentiment, where Benaroya’s feminist revision is at its most innovative.

Benaroya’s womanly figures are indeed immensely muscular, seemingly constituted from wells of vivid color; yet while they may be fantastical by nature, the emotions and relationships between these women anchor them to our experiential reality. Through this dual nature, Benaroya’s works simultaneously embrace the fanciful and exist as emotional biographies. We must remember that Benaroya’s images, just as the midcentury automobile billboards, are made with a preconceived viewer and motive in mind.

Throughout this body of work Benaroya reflects on how women and their bodies were, and continue to be used to sell a hyper-masculine conception of success, freedom and conquest. While the advertisement suggests that if you buy the car you might get the girl, Benaroya liberates and empowers the women of these images, inverting the notion entirely. There is no doubt that it is we, the viewer, in the passenger seat and that these women are behind the wheel. Buckle up!”

Ana Benaroya (b. 1986, New York) lives and works in Jersey City, New Jersey. She received her MFA in painting from Yale School of Art  in 2019 and a BFA from the Maryland Institute College of Art in 2008.

The Passenger: An Interview with Ana Benaroya | Juxtapoz

These Are the Essential Artists You Need to Watch | Elephant Magazine