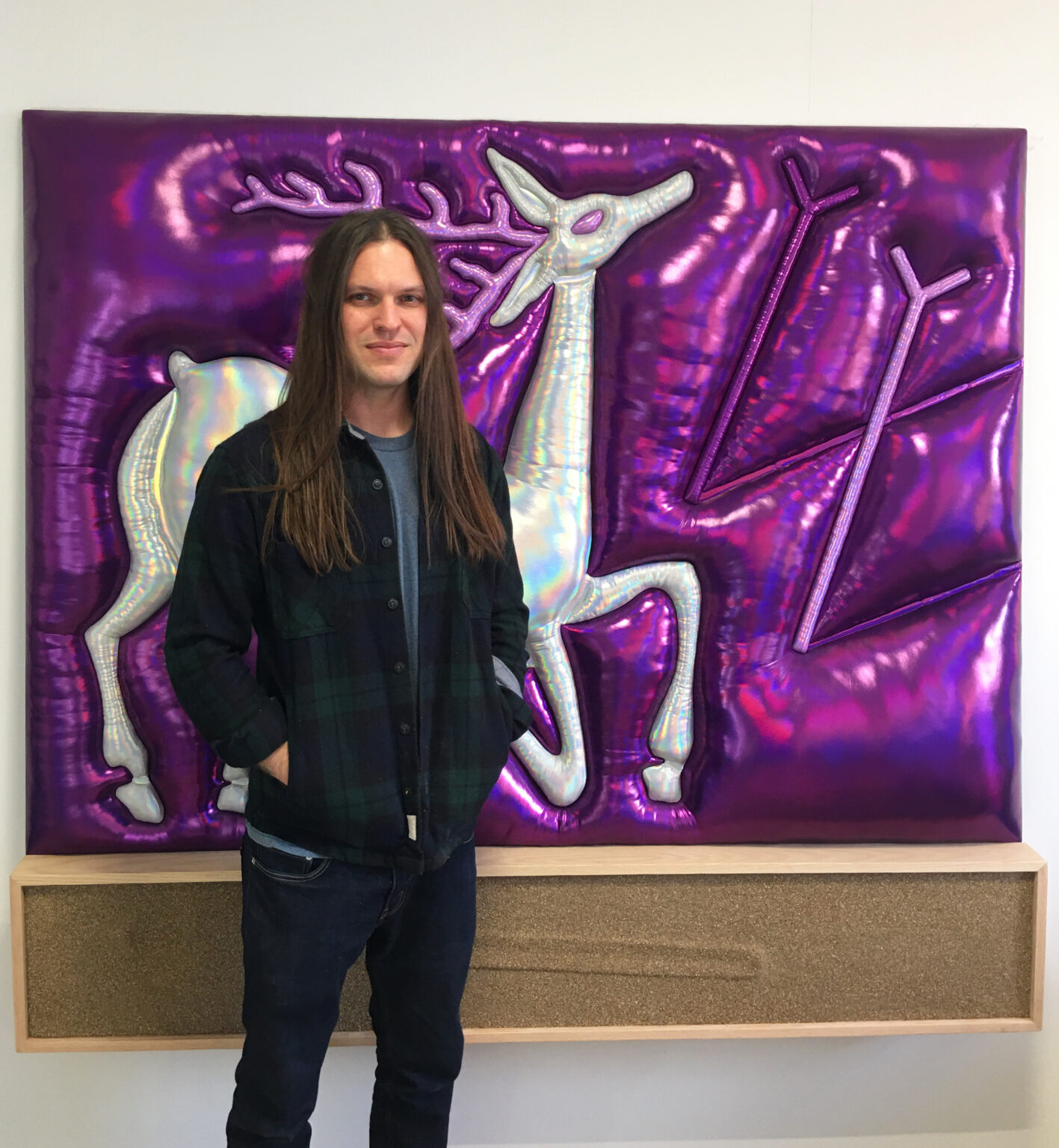 “There is a certain sense of theatricality to the American West, especially in our disconnect from the reality of American history and the nostalgia that has been sown for things that never happened. The universally understood identity of an American as it related to the West is of an individual’s ability to tame or conquer.  Once the West was “conquered”, there was a need to keep this American identity alive, resulting in the creation of new frontiers to conquer, leaving the symbols associated with the old frontier behind, like a breadcrumb trail. I am sharing the discarded symbols as translucent signs leading throughout the space amongst lines drawn in sand and inviting the audience on a journey of their own making.”

A tribal member of the Catawba Indian Nation in Rock Hill, South Carolina, Young explores the development of language and signage in the American West. Young’s wood, sand and fabric sculptures, which he refers to as ‘waymarks’, adopt historical symbols from Paleolithic cave paintings, ancient Greek pottery and imagery of Hollywood Westerns and Looney Tunes cartoons. Young depicts the histories and mythologies of the frontier,  an ideological concept popularised by the historian Frederick Jackson Turner, which has signified both Eu­ropean opportunity and indigenous genocide.

Young’s sculptures are characterised by a sense of movement and elusiveness. Coming from a military household, Jon Young’s practice addresses the necessarily nomadic lifestyle of his childhood, connecting that sense of displacement to his Native American heritage.

“There is a kind of mapping that is happening in the work, a mapping that attempts to collapse the meanings of symbols of the mythological West as they relate to my Native American heritage and my journey. It’s trying to make a map using ﬂuctuating symbols, to get back to a home that hasn’t existed for a very long time or for so long that you question if it existed at all.” Jon Young, Slominski Projects, 2020

Young’s latest series is informed by his experience of living in the Mojave Desert in California: ﬁres, snakes, scorpions, horses, grasshoppers, moths, sand, tables and posted signs all appear in a translucent and iridescent aesthetic. These sculptures flicker, shift, and move as the viewer orients themselves to the work, like a mirage in the desert. These sculptural reliefs are built entirely by hand by Young like a piece of furniture, always with a virtuoso use of unorthodox industrial materials. The reliefs sit on boxes incongruously filled with sand which appears to defy gravity – the sand is fixed into a rubber resin – the line ‘drawn’ on the surface, grounding his sculptures to the land.

Jon Young was born in Winston Salem, NC (1981) and now lives and works in St. Louis, Missouri. He holds a BFA from the University of Wyo­ming and an MFA from the Sam Fox School of Design and Visual Art at Washington University in St. Louis.

Jon Young will have a dedicated presentation with Carl Kostyál at Intersect Aspen in August 2021. His debut solo show at Carl Kostyál London will take place in June 2022.

Jon Young, A Space to Be Present | Art Saint Louis